As you hit your 40s, you begin to notice a significant proportion of the people you know start to either get ill, or bits start falling off.

Particularly among the women who’ve had children.

Even the athletes you know, the ones who run 40 miles at a time, or a half marathon during their lunch break, start to suffer from perpetual injuries because their bodies just can’t hack the pace any more. This wasn’t entirely what I was expecting from this decade.

I recently went for lunch with a friend I’ve known for years, who was 40 this year. She’s putting off a major operation because she’s still got a toddler at home. To make her feel better I showed her my hearing aids. Yes, it’s not a glamorous look. If you used to get called the Greta Garbo of the sixth form, it may not go with that version of your self image. However, I wear them. It helps me hear ‘Will you empty the dishwasher?’ instead of ‘Will you have a chocolate biscuit?’. It avoids my husband thinking I’m being selectively deaf. I’m not saying I don’t occasionally practice selective deafness anyway but…….

I have genetic hearing loss, inherited from my Dad’s side of the family and I fully expect to be completely stone deaf in my 80s. Glasses seem to be socially acceptable at this age, but hearing aids are not. There are a lot of adverts on hidden versions and comments on how you can’t really see mine. I’ve now lost count of the number of conversations I’ve had with people where they’ve admitted ‘yes I need some of those’ or ones that go something like this:

Waitress: ‘The quiche on special today is the leek, mushroom and creme fraiche’
Me: (with my hearing aids) ‘Ok thank you’
Friend in 40s: ‘What was that?’
Me: (laughs): ‘What did you just say to me about needing hearing aids?’

Maybe it’s because they’re my friends, but the way most people I know deal with their problems is to use humour. In my experience the women are fairly blunt with one another. Friends with pelvic floor issues that will affect their performance on the dance floor and need to *ahem*, prepare in advance, will tell you. You will laugh (with them), until you cry. You will share whatever it is that also bothers you and you will console each other.

Others will get really sick. Someone close to me has had breast cancer and has been in treatment for the last year. She has very small children and I don’t know how she’s done it. Her prognosis looks good but she remains the reason I’m making myself run a long race for charity in the Autumn. As readers who have seen this post will know, I love running, so it’s not a hardship and I don’t need anyone to say well done. I am also running it because I want to stay fit for as long as possible and I will carry on doing so for as long as I can.

Sweaty woman in skin tight neon don’t look glamorous either but I’m thankful I’m not doing so badly and that I’m able to carry on laughing with my friends. 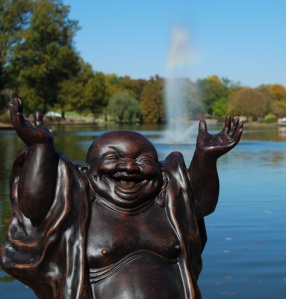 Gratuitous use of laughing Buddha. Whatever’s happening in your life, he made you smile didn’t he?
Photo credit: MichaelKuhn_pics / Foter / CC BY-NC-SA

Lions can wear glasses too

Learning to dance in the rain

My fight against cancer

Enjoying the best things in life in Ireland and beyond

Pull Up a Chair

musings of a millennial expat